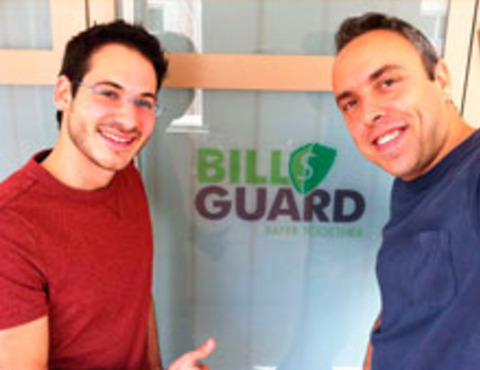 Interview with the serial entrepreneur Yaron Samid (on right), who together with his co-founder Raphael (on left) is working on a new cool product called BillGuard, a people-powered antivirus for your bills. The product tries to harness the “collective vigilance” of consumers to protect everyone from unwanted charges such as hidden fees, billing errors, scams and fraud on credit card bills. For their first financing round, the startup was able to attract an impressive list of investors, with Bessemer Ventures, Chris Dixon The Founder Collective, Ron Conway SV Angel, Roger Ehrenberg IA Ventures, Howard Lindzon Social Leverage and Yaron Galai (Founder/CEO, Outbrain, Quigo).

Please introduce yourself and your co-founders to our readers.

Raphael Ouzan, chief architect has been hacking for fun since he was 11 and professionally since he was 13. He led data intelligence and security swat teams in the elite programming units of the Israeli army. He's won every award possible including the Israeli President's highest honor for technical innovation. He's cheating on his girlfriend nightly with his second true love: big data. Yaron Samid, CEO has been building Internet companies since 2000 and led PM and marketing teams at startups that became publicly traded giants before that. Prior to BillGuard, Yaron co-founded Pando, a 40M+ user, profitable company in NYC. His labor of love is TechAviv the global Israeli startup founders club which he founded and runs.

How did it all start?

Yaron got a call from a friend who spotted a post-transaction scam on their credit card bill that also appeared on Yaron's. That ignited the question: What if we could harness the "collective vigilance" of people who regularly check their card activity for the benefit of everyone, including most of us that don't? How great would it be to get an alert anytime a charge on your bill is flagged or complained about by someone else on their bill? The very essence of the Internet is its unprecedented ability to connect people, resources and previously silo'd data-sets. We felt it was time to bring transparency and collaborative intelligence to transaction data stuck in the mainframe era. Mainly though we just wanted to stay lazy and have a smart assistant checking our statements. Turns out there's a lot of bad stuff (hidden fees, billing errors, scam, fraud) on everyone's statements and most of it goes unnoticed.

How come banks aren't dealing with this problem?

Banks are doing their best to identify and prevent fraudulent transactions but by their own accounts catch only about 33% of fraud. The rest is up to us as consumers to catch by checking every line item of our card activity. Problem is 9 out of 10 of us don't. Also, a bank's fraud detection does not address the far more common cases of "unwanted charges" such as hidden fees, billing errors, misleading advertising/scams, unnoticed recurring subscriptions, etc. All that is up to us as consumers to catch. BillGuard harnesses the little each of us do and know about bad transactions for the benefit of everyone.

What about privacy? Will you have insight in users' bills?

Privacy and security are the top priorities at BillGuard. Our users trust us with their credit card transaction data and we literally obsess over how to make sure we always live up to and maintain that trust. Part of that includes not storing any personally identifiable information beyond an email address to send alerts to. So we don't know who a transaction belongs to, just that it's good or bad and what email address to use for notification. Our privacy policy is of the highest industry standard and our security measures are on par with a bank's website.

Is there a chicken/egg problem? If so, how do you plan on incentivizing enough users to check their statements through BillGuard?

Any pure crowdsourcing system has a chicken/egg challenge but BillGuard is actually a unique hybrid that learns about bad charges not only from our users but from scouring the web for complaints about merchants/charges and from analyzing millions of transactions from banks. Our users are incentivized to validate the results of their scan reports because any input they provide makes BillGuard smarter and better at protecting them. The UX is akin to Google Priority Mail. BillGuard prioritizes the stuff that requires your attention and with a few clicks the system learns and becomes even more accurate.

There is already a lot of validation and vested interest in your idea. Was there a clear strategy to pitch investors from the very beginning?

Actually, yes. Building your third company comes with the benefit of being able to project far down the road, but only time will tell if our vision will play out. It's always a crap-shoot when you dare to build something that only exists in your head.

What are the more important things that you learned from your past startups, and that you said to yourself "this I'd do different in my next startup"?

Take the good and bad moments as natural turns of a ridiculously fun ride and enjoy every moment.

What a lot of readers want to know is when we can expect the launch?

We'll be opening up a beta in Q2 this year but bravehearts can sign up for the early alpha today at www.billguard.com.

Thanks for sharing your story with us Yaron. You guys are on to something really interesting! I wish you and the team all the best with the further developments and above all a great launch!

Experience it from the beginning and sign up here