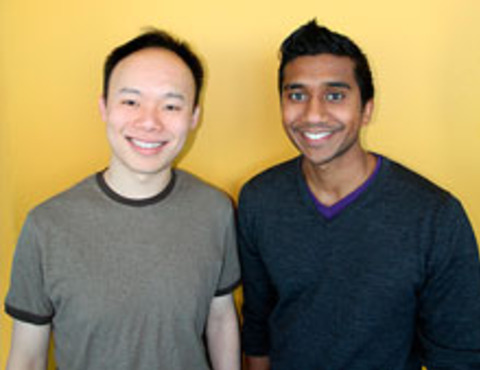 Above guys are Jimmy Do (left) and Ryan Panchadsaram (right), founders of Funnel. An easy way to create forms and surveys for the mobile phone. In this interview we'll talk with Ryan about Funnel, the process of mobile development and much more…

Who is Ryan Panchadsaram?

My name is Ryan Panchadsaram and I’m a product designer. Before starting TapTheory with Jimmy Do, I worked at Microsoft where I was responsible for the user experience and design of Outlook for Mac 2011.

Our team is just the two of us. We’re bootstrapping and hacking everything together ourselves. Jimmy is an extremely talented developer. He can take any idea and make it come to life.

Before we talk about Funnel, could you share a bit on when you decided to found your own company?

Jimmy and I have always had the entrepreneurial itch. We started TapTheory about three months ago to create tools for businesses that let people move beyond the desktop and use smartphones and tablets to get work done better, smarter, and faster.

What is Funnel and how did it get started?

Funnel is the easiest way to collect data using iPhones, iPads, and Android devices. By creating a survey that fits perfectly in the palm of your hand, Funnel goes where the computer can’t.

Funnel started from a prototype we built in November. It was so bare-bones. All it did was show sample screens and respond to touch gestures. We showed it to friends and local businesses and they loved the experience. Using your fingers to take a survey felt so natural. Since then we’ve been building it out and getting it launch ready.

Could you give us a real-life example of how one might use it? Perhaps there's a use-case for entrepreneurs.

For entrepreneurs that are developing applications for the iPhone, you can add a Funnel survey and start to collect bug reports and feature requests. For businesses that interact with customers in person, like a hotel, you can email or SMS a link to a Funnel survey to gauge how their experience was and identify at-risk customers.

How does being your own boss compare to your previous job at Microsoft? How did it change your day-to-day life?

When you are at a large company like Microsoft, you have to convince a lot of people before you can get buy-in to start a new project. Being your own boss is a mix of pressure and empowerment. Pressure because every decision, tradeoff, and bet you make impacts the future of the company. That's empowering too because Jimmy and I can take big risks that we believe are right.

What are Funnel's distribution and revenue models. In other words how do you find your customers and how do they pay you?

Creating and distributing surveys via smartphones is new and we don’t want to limit the way people and businesses use it. So the core of Funnel is free and we intend on keeping it that way.

All surveys and forms sent today will have a “Made with Funnel” ad on it. Businesses can pay to have that removed. We will be adding more paid features down the road.

We want Funnel to reach as many smartphones as possible, so we’ve chosen to build a web-based mobile app.

My advice to new developers is simple. If you are building a utility or a game that is meant for individuals, then start developing for the iPhone. The tools are great and the App Store is a powerful distribution mechanism. Once you get your app out the door, then you can start exploring other platforms like Android, Blackberry, and Windows Phone.

But if you are building an app that needs to work across multiple devices throughout an organization, then start with a web app. Since iPhone, iPad, Android, and Blackberry all use WebKit-based browsers, you can develop for multiple devices much quicker.

The recent years there has been quite a bit of development in terms of mobile technology. I think a lot of people would agree with me the iPhone and the App Store were major milestones in this. What do you think will be the next big thing?

The iPhone is just the start of a new generation of low-barrier computers that do exactly what you need them to do, when and where you need them. I think the next big thing will be when everyone around us starts carrying smart touchscreen devices. Right now 28% of mobile subscribers in the US have a smartphone. That number is growing fast.

These kinds of devices enable computing “in the moment”. It's this in-context nature of mobile devices that we believe will be a crucial part of the future of computing. This is one reason why we created Funnel--to provide in-context data collection to individuals and businesses.

Where would you like to see Funnel in 5 years time?

In 5 years, I would love for businesses to think of Funnel immediately when they want to put a smartphone or tablet to work. It's going to be a long road, but we're starting with simple things that they are familiar with like surveys.

Thanks for sharing your story Ryan!